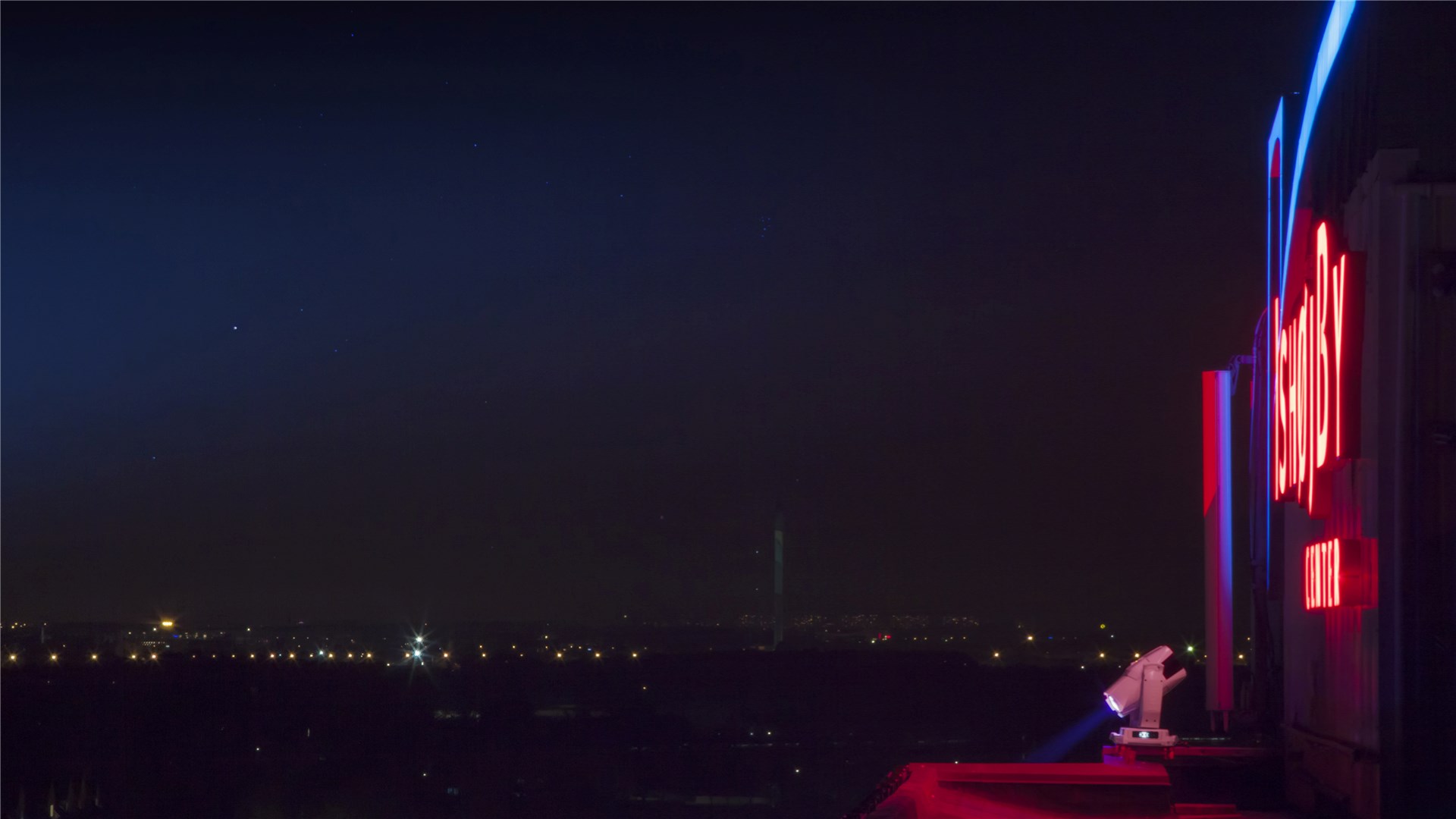 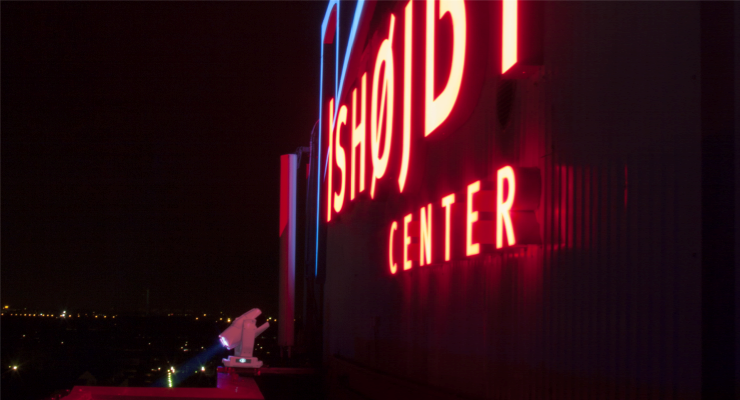 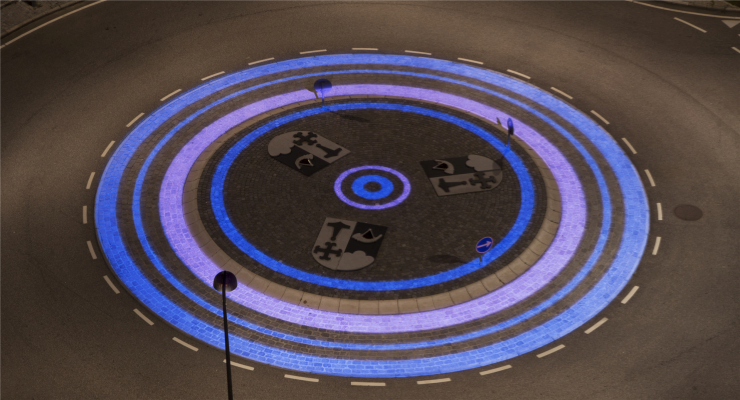 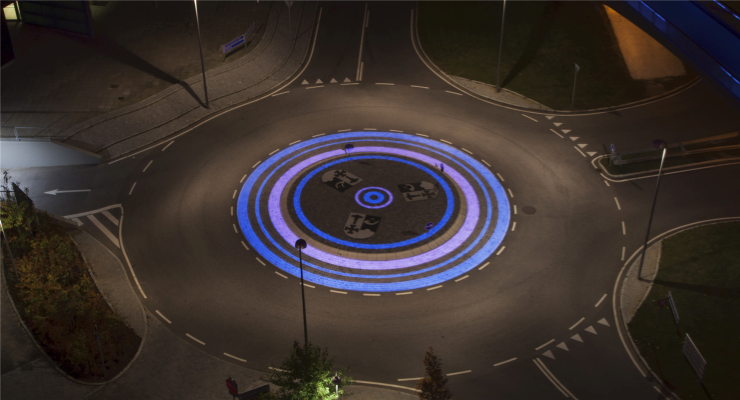 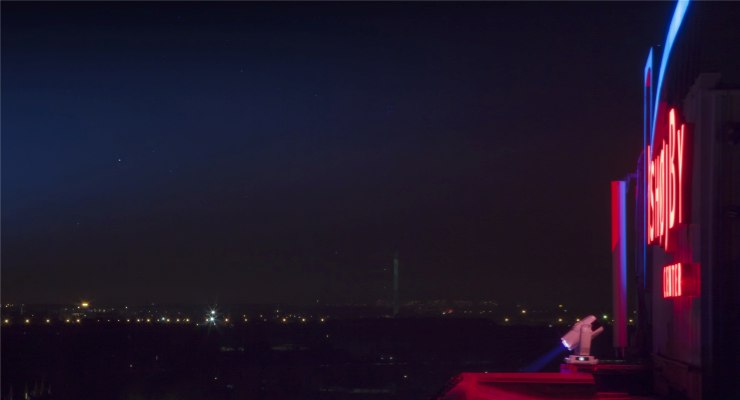 As an extension of the successful lighting design project for the new forecourt at Ishøj Station (DK) and eastern part of the city centre, the municipality decided to complete the lighting for the city centre including the adjoining urban areas and a roundabout.

Changing the conception of a raoundabout

The lighting concept for the station forecourt is based on artistic interpretations of the element water which create a visual link to Ishøj’s maritime environment and to the Museum of Modern Art, Arken. Water being the creative starting point, is expressed in architectural light settings of colour tones and projected images that create narratives and a unique atmosphere.

In order to create a coherent lighting for the entire area, ÅF Lighting extended the lighting concept and assigned an element to each project area. Water for the station forecourt; Fire for the high facades of the city centre; Earth for the city park and Air for the bridges.

In accordance with the first part of the city centre illumination, the high facades were illuminated with SixPack and P-5 luminaires from SGM. The colour red was assigned once more as a reference to the element Fire as well as a contrast to the blue-white colour tones at the station. The fixtures excel in lumen output, lighting performance and design and were therefore the preferred choice for the lighting solution. Different beam angles were combined to achieve an even and intensive lighting effect without minimum spill light and lighting pollution. In order to reach the selected facades, the luminaires were mounted onto the lower roofs of the surrounding buildings and on poles in a customized version to match the aluminium look of the pole.

A special challenge was provided by the roundabout in front of the west entrance of the city centre. ÅF Lighting’s intention was to stage the roundabout with a watering motive similar to the ones used at the station forecourt. Due to the size of the roundabout a pole-based solution proved to be ineffective and would have had a negative visual impact on the appearance of the area, especially during daytime. The use of the several individual luminaries would furthermore have required the division of the projected image into smaller parts that needed to be joined perfectly in order to create a seamless watering projection.

Frederik W. Borello, Electrical- & Lighting Engineer: “We found a quite unusual solution to solve the challenge and placed a G-Spot luminaire 50 meters from the roundabout on the top of the 35 m high building, with the intention of creating a perfect, sharp and spectacular projection of 3 different water rings.”

To verify the solution ÅF Lighting, with support from SGM, carried out a test lighting that proved the G-Spot to be just the right fixture.

Frederik W. Borello: “The product was perfect due to its high IP rating (IP65) and its high efficient LED technology combined with a great optical system that allows optimal focus and zoom of the 3 projections. The colour blending of the multicolour LED is very uniform, and the projection has the same high quality as watering at the station forecourt, where we used metal halide. The result is very satisfying.”

Franziska Bönecke, Lighting Designer and Project Manager: “The beam throw from the top of the building to the projection surface is approximately 60 meter and required the smallest beam angle to fit the diameter of the roundabout. The gobos are custom-designed and keystone corrected by ÅF Lighting to assure perfectly round water rings that follows the layout of the roundabout. Once a month the water rings change shape and add a little variation to the night-time scenery.”

The luminaire was furthermore custom-painted in white by SGM to minimise its visibility on the roof top during daytime and to blend in with the other technical equipment on the roof.

Franziska Bönecke: “As the lighting is tailored to fit the roundabout, glare and negative lighting effects for drivers and pedestrian are avoided. Many spectators are under the impression that the water rings magically appear as no light sources can be detected in the nearby surroundings. When having a closer look, they might be able to spot the single luminaire that is placed on top of the high building far away from the installation.”

The combination of innovative thinking and state-of-the art-technology has created a fantastic lighting project that impresses by night and is invisible during daytime.

The G-Spot did the job on it's own