It's a challenge to find fixtures that can both do the job and endure the weather conditions.

On December 23, 2017 and throughout January 2018, the 18 km long fixed link between East and West Denmark was illuminated in green to mark the beginning of a lower bridge fare . At the same time, the eye-catching installation on the world's third largest suspension bridge was an experiment with energy-reducing LED fixtures. The lighting for the occasion was designed by ÅF Lighting for the client Sund og Bælt, the owner of the bridge.

"We wanted to create a professional architectural façade lighting, with beautiful even lighting from the roadway and all the way up to the top of the pylon, while leaving out unwanted highlights.The pylons are 254 m high and the luminaires was placed next to the roadway at 68 m height, which resulted in an approximately 186 m vertical structure to light up," said ÅF Lighting's Electrical and Lighting Engineer, Frederik Waneck Borello.

Using SGM's P-10s, i-5s, and P-5s, supplied by VIGSØ A/S, ÅF Lighting was able to create a magical green illumination on one of the two iconic pylons on the fixed link, which consists of two bridges and a tunnel.

"For this all-green illumination, we only used a small part of these RGBW luminaires' full power potential. But in return, these versions enable you to use various colors for special occasions, while creating a beautiful white coverage for every-day use - perfectly matching the existing light on the bridge," said ÅF Lighting's Electrical and Lighting Engineer, Frederik Waneck Borello.

The Danish electrical and lighting engineer always thinks a project all the way through before beginning a set-up, referring to himself as quite the perfectionist. Thoughts like daylight vs. nighttime, the aesthetics of a structure, the environmental setting etc. For this project, it was an important factor that more than 35.000 vehicles cross the long, fixed link every single day, adding up to 10 million vehicles a year. With a price reduction, however, this number is expected to grow by 4.500 vehicles each day.

"I always consider the environment where the installation will be set up. That includes the users. You want to create a beautiful light installation without causing unnecessary light pollution. In this case, we needed to ensure any unwanted glare on the many crossing cars. The light must compliment the setting, not work against it," said Borello.

Frederik Waneck Borello, who started as a lighting engineer 12 years ago, is a well-known name in the architectural lighting world. Two years into his lighting career, he worked on his first international award-winning project, "The Nyborg Bridges", and has been hooked ever since, often turning to SGM luminaires.

"I especially like SGM's P-2 and Q-2 because you get a massive output in a very small footprint. As I can use less fixtures with less wiring and cables, I don't have to worry about ruining the aesthetics of a building's or structure's surroundings," said Borello.

Before taking down the luminaires, the client gave ÅF lighting permission to test a variety of light settings to learn more about color usage on huge structures for future projects. While the graduation of red to orange gave association to a sunset, the all red illumination could be used for Christmas etc.

"We used the P-10, with its powerful output, to light up the tall vertical sides. To smoothen out the light from the P-10, we used the P-5 with various lenses for both the lowest parts and the middle section. Finally, for the tallest part of pylon, we used the i-5 with the much narrower beam," explained Borello and continued. "For a large-scale application like this one, it is a huge advantage to use luminaires with a high lumen package. Otherwise, you have to install multiple luminaires, which can ruin the aesthetics of the architecture and demands more time for fine-tuning. This installation was my introduction to SGM's extremely powerful P-10, which worked great for this project."

ÅF lighting used fixtures from SGM's Entertainment section, which worked great, even after heavy winds, rain, and salty seawater moist. However, for a permanent outdoor installation, the POI (Permanent Outdoor Installation) luminaires from SGM's Architectural section are specifically engineered to endure even the most extreme weather conditions – eliminating the need to shield off the fixtures.

"Besides the challenge in evenly lighting up a 254 m pylon with the same light from top to bottom with minimum fades, the environment around this installation is one of the toughest: you are high up, the wind is tough, and there is salty seawater in the air. It's a challenge to find fixtures that can both do the job and endure the weather conditions. We used fixtures from SGM's entertainment section, and they did the job and never failed. I'm sure the POI versions will work great for a permanent installation," said Borello. 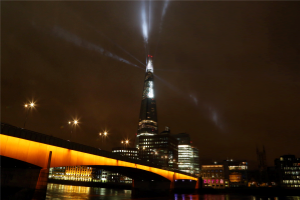 The Shard’s light spectacle in the sky Read more