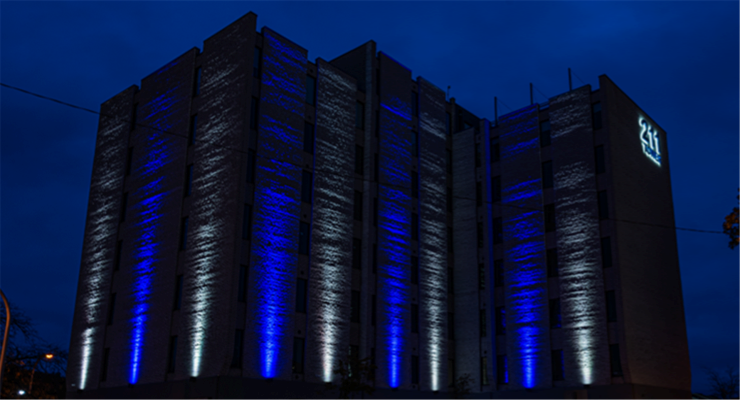 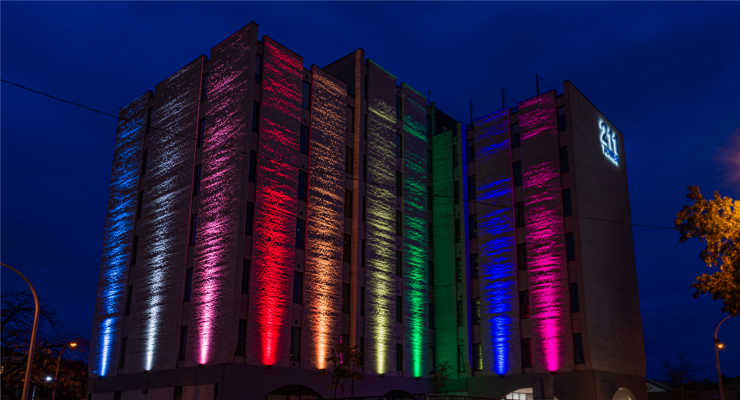 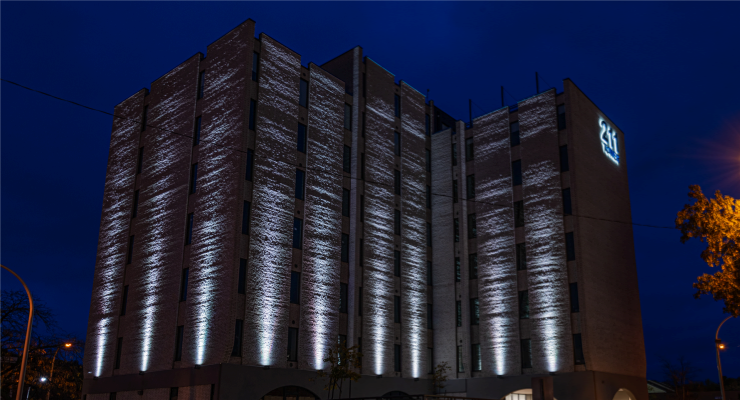 SGM provided the dazzling finishing touch on the renovation of 211 Tower, an 8-story office building in Pittsburgh’s up-and-coming East Liberty neighborhood. Built in the late 1960’s in the thentrendy Brutalist style, now the building shows a colorful facade based on i-2 luminaires.

We adjusted the lighting program to take advantage of the unique white brick “canvas” that we had to work with. The white canvas allows us to really manipulate the color of the building at night and fully engage it with the neighborhood.

26 i-2 POI units illuminate 211 Tower's facade in East Liberty, installed over 90º mounting plates. The IP-66 units were supplied by Alphabet City Management, in collaboration with Next Architecture and general contractor Brubach.

SGM provided the dazzling finishing touch on the renovation of 211 Tower, an 8-story office building in Pittsburgh’s up-and-coming East Liberty neighborhood. Built in the late 1960’s in the then-trendy Brutalist style, the building presented the new owners with an "image problem."

Next Architecture and general contractor Brubach, started by cleaning the façade, replacing windows, and undertaking a dramatic overhaul of the plaza that surrounds the building. With day-oriented improvements complete, the team was looking for a solution to make the building "pop" after dark. After considering a more complicated façade solution, the decision was made to simply highlight the existing material.

The owners sought a small, powerful, and budget-friendly RGBW fixture capable of a seventy foot throw with minimal setback from the façade. SGM’s IP-66 rated i-series in its POI (Permanent Outdoor Installation) variant was a natural choice as it checked all of the boxes and offered long term color consistency with the onboard TruColor™ technology. But, that left a final question: is a 9,000 lumen i-2 POI or 20,000 lumen i-5 POI fixture needed? To find an answer, SGM offered renderings of the project allowing the owners to decide between two great choices.

Ultimately, the renderings determined that the 9,000 lumen i-2 would be the perfect match and the project proceeded quickly with delivery just six weeks from the decision.

“The lighting will be updated and changed as priorities and concerns change in the community.” Anthony Dolan, Alphabet City Management.

Other fixtures on the market that are similar in size to the i-2 are only bright enough with monochromatic arrays. The ThermalDrive™ technology on the i-2 enables the fixture to deliver uniquely intense, high-quality mixed white light and full spectrum color preserving the flexibility required for the project.

The DMX lighting control system is the Miranda controller from Pittsburgh-based Ben Peoples Industries. A built-in calendar provides an easy scheduling platform for both daily looks and planned holidays. For a spontaneous effect, the Miranda controller includes a web component that allows the owner to securely login from any web browser to immediately recall a preprogrammed look.

The SGM installation transitioned the building into a neighborhood icon attracting positive attention from passerby. With time, the future-oriented, reliable lighting system by SGM will support 211 Tower as a lasting landmark in East Liberty.