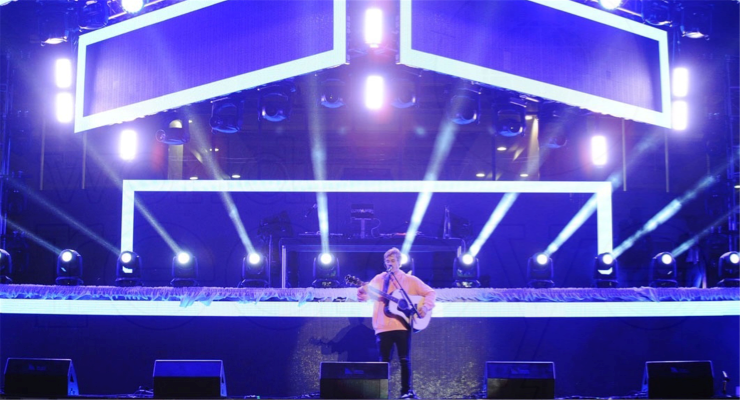 Justin Bieber gave a concert at New Year's Eve 2017, and for this event he needed stage lighting. SGM partner and supply company, Everlast Productions, ensured that this was done and chose SGM lights.

The Q-7s set the bar for an LED strobe fixture. I will definitely use them again.

Everlast Productions have carried out the New Year’s Eve Party at Fontainebleau Hotel for several years. It was the first year that Tyler Frank spearheaded the overall design. Tyler and his crew took the shell of the structure from previous years and incorporated that into the new design for the stage.

He wanted to create something that had more depth, immersion and dynamics, all the while fitting into the tight restrictions of the space. They built a 18m wide x 15m tall x 13m deep (60’ wide x 50’ tall x 40’ deep) structure and stage over an existing poolside bar. The lighting design had to be practical, bright and resilient to South Beach weather conditions. He explained why he chose the Q-7s for the stage setup:

“The Q-7s were the main cannons for the show. They were the only fixtures that I could trust to fill in the void between the LED walls and to have an output bright enough to make it across the pool. The Q-7s were going to be out in the open to the elements and so the IP-rating and the durability of SGM was a no brainer. The fixtures acted as bookends to the LED wall and really brought synergy between the lighting and video elements.”

Tyler was very satisfied with the performance of Q-7s from SGM:

“The Q-7s set the bar for an LED strobe fixture. It’s a tank and can handle anything you throw at it. I didn’t have a single issue with these fixtures, whereas I had several with others due to the rain. The Q-7s are now in my bag of tricks - and I will definitely use them again.”

The Everlast Production crew had no idea who the headliner was going to be until a few weeks beforehand, so they focused on creating a large canvas that could support any act. Once they found out that it was Justin Beiber, they got in touch with his team to make any changes. Fortunately, they loved the rig and rocked with what Everlast Productions had provided them. The Lighting Designer from Justin Bieber's team, Nick van Norstrand, took the rig and made it fly.