SGM rocks out with Willow Smith at EMA Honors

The Environmental Media Association (EMA) is a non-profit organisation that promotes environmental progress and the transition to a green economy through entertainment, storytelling and education. EMA Honors is one of the most prestigious events held annually by the association in Los Angeles. The event honors the winners of an award ceremony held earlier in the year and is designed to bring awareness to environmental concerns as well as to inspire people across the globe to live more sustainable lifestyles. EMA Honors 2019 featured the American singer, actress and activist Willow Smith, whose performance managed to bring out a real rock-show feel - thanks to talented Lighting Designer, Scot Gianelli, and the extremely powerful SGM P-10 fixtures.

We knew we wanted big punchy colorful looks for her show that could be large and soft and beautiful or high energy and frenetic, didn't have much room to work with, and being in November, had to contend with inclement weather. With those factors, the IP65-rated P-10 was a no-brainer fixture to be our workhorse.

Scot Gianelli loves exploring the lighting world using new advances in technology, where he turns the spectator into a completely immersed participant, dynamically engaging their every sense. For Willow Smith's performance at the EMA Honors, he was tasked with bringing in a compact lighting package that would be able to provide the artist with a rock-show feel, and that is exactly where the SGM P-10 proved to be the perfect solution.

Scot Gianelli had wanted to try out the fixtures for a while, and now that he had the chance, he was incredibly pleased with the result, and complemented the P-10 on its elegant design and powerful features: "It has this beautiful, large face that creates large-format eye-candy effects, both as broad-stroke colors as well as dynamic, pixelated movement that gave us a huge variety of possible looks with a very simple setup".

He also adds that with lower output fixtures, you often find yourself desaturating the color just to get enough output, but with such a powerful fixture as the P-10, it was really exciting to be able to go so saturated and so bright when it came to lighting the bodies on the stage as well as the backdrop.

As the performance was set at a venue with extremely limited power, the fact that the P-10 is LED, with a relatively low power draw given its output, was also a huge advantage.

As Scot Gianelli is very enthusiastic about the performance of the P-10, he has no doubts about using the SGM fixtures in the future. "With COVID-19, we saw a massive and immediate push to move as many events outdoors as possible, which meant that we had to contend with unreliable weather more than ever. Having a fixture as powerful as the P range of fixtures that are also IP65-rated is a massive asset to me." - Scot Gianelli, GNLE Design. 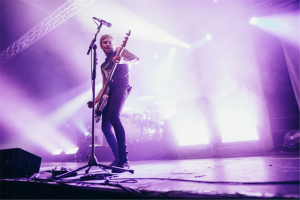 Patrick Rabus with SGM on the ITCHY Tour Read more